An Awesome Girl Wiki
Register
Don't have an account?
Sign In
Advertisement
in: Articles in need of attention, Video Games, Mario,
and 2 more 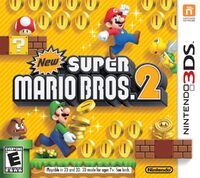 New Super Mario Bros. 2 is a Mario game for the 3DS that is the sequel to New Super Mario Bros. It consists 6 worlds in the game, plus 2 secret worlds and the 9th world which is accessible after the player beats the game. There is also a sidequest included in the game called Coin Rush in which the player has to collect as much coins as they can in levels that they have normaly played in under a time limit. The game can be also played with another player nearby that also has the game.

More packs for Coin Rush are unlocked as the player beats more of the game(For example, the Mushroom Pack is unlocked after the player betas Worlds 1 and 2). There are only three packs to unlock in gameplay, but the player can buy more packs with real money. In Coin Rush, the player can chose to be normal Mario, or White Raccoon Mario. If the player just choses Mario, he automatically has a Golden Fire Flower in his inventory. The player only gets 100 seconds to beat the level, but if the player gets to the middle flag, they get 100 more seconds. In places without flags(EX:Ghost Houses), the player recieves Time Lockets which add to the amount of time left. StreetPass can be activived to share scores and to compete to beat others records.

The game includes a total of 7 different bosses. For all of the towers there are...(To be continuted)

Community content is available under CC-BY-SA unless otherwise noted.
Advertisement